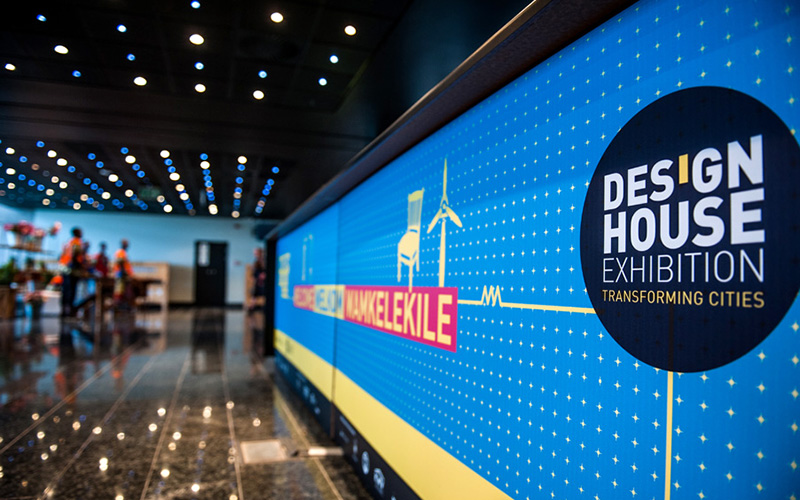 A Tale of Transforming Cities

As a signature event of the international programme for World Design Capital Cape Town 2014, the Design House Exhibition was held from 16 – 20 October 2014. Under the theme, ‘Transforming Cities’ several municipalities from across Asia, Europe and Africa displayed booths that shared a story of urban transformation through design.

We asked some of the participating cities to share the story of transformation that was on display and what advice they would give a city that is looking to better integrate design into its administration, landscape and urban revitalisation?

Our tale was one of two cities, a multimedia installation exploring the parallel narratives of Accra and Cape Town through history, from culture and their independence struggles to their current connected economies.

Our advise would be to tap into the resources immediately available to you; local resources, local materials, local minds. Local dialogues on local issues will generate more appropriate responses to local challenges, and engaging the local public will ensure a unified growth. That said, do not be afraid to engage beyond your borders – this level of interaction offers the opportunity for fresh perspectives and ideas, and could be the catalytic agent that ignites an inspired new dialogue on old issues.

The exhibition was not only about a city, but of the whole region of Bavaria. It told the story of how a city and a region can be transformed through innovative and creative design and construction methods to be more energy efficient. It shows sensitivity for the natural environment and how people work and live within their environment.

The Urban Planning Department of the Supreme Building Authority in the Bavarian State Ministry of the Interior, for Building and Transport is responsible for all fundamental urban planning matters, e.g. technical and legal issues related to urban land use planning, planning research, experimental planning projects, regional/state urban planning and the assessment of large-scale projects. The priorities of our section include topics such as energy efficiency, mobility, sustainable development of town centres, demographic change and its consequences for construction, inter-communal cooperation, innovative forms of public participation and equal living and working conditions both in conurbations and rural areas.

In our opinion an integrative approach is the most important thing. The challenges cities have to face today are complex and necessitate them to act coordinated and interdisciplinary. A strategic plan enables the cities to make qualified decisions. Moreover you get an overview of positive and negative developments, new perspectives and common aims. But to achieve this goal it is essential to integrate the local residents and players into the planning and decision-making process at an early stage. The acceptance of individual projects plays a key role.

The ‘Growing with a Transforming City’ exhibition looked at the work of Dublin City Council’s Housing Department, and the role of design in delivering transformed homes for a dynamically changing population and a continually evolving historic city.

The exhibition showcased a series of housing design projects, looking at how they are undertaken to understand the needs of users and their communities through participation, consultation or co-design and also how projects are designed to deliver wider social and economic change in city districts.

The exhibition was a focus for discussion of the issues which arise in the ongoing development of housing: understanding users, working with the urban context and historic typologies, developing wider outcomes, setting standards in sustainability and design quality, and innovation in delivery models.

In Dublin, multi-disciplinary delivery teams have been a feature of successful projects, such as the re-landscaping of the city’s key public realm areas of Grafton Street and O’Connell Street. This approach promotes well-rounded brief and design development, which takes into account the requirements of different stakeholders and contextual issues.

The in-depth involvement of the communities or residents who will be the ultimate end users of projects has been central to the City’s recent regeneration projects, as exemplified by the Ballymun and Herberton schemes, which featured in the exhibition.

Dublin City Council’s policy of having design quality criteria written into the city’s development standards is a useful mechanism for ensuring that design and sustainability assessment takes place as part of the planning permission process for all significant developments in the city.

France is the only country in the world that has grown its tram network with the same fervour as China in the last three decades. Nearly 30 tramlines in 30 years and nearly 30 billion Euros spent. The results experienced by hundreds of thousands or even millions of users remains a little known story of urban revitalisation despite its magnitude. The reasons for this success are unknown, despite the fact that they can be easily replicated, as demonstrated in the RATP (Régie Autonome des Transports Parisiens) booth at the Design House Exhibition in Cape Town.

The first reason for this success is the excellent urban design born through the tram system. For example, in France, a tramway project is both a transportation project as well as an urban design project where development of public spaces, cityscapes, street furniture innovative and the design of the trams themselves as well as all connected information are considered. The high quality of the results of the first modern tram networks that emerged in the late 1980s served as a model to generate all the other projects under the leadership of local governments.

The second reason is the relevance of legal and administrative tools available to these local governments to finance these projects and undertake feasibility studies. To France, the tram represents a great story of decentralisation, which has allowed thirty cities across the country to transform themselves thanks to the return of this mode of transport that had been removed in the decades surrounding the Second World War. The re-emergence of the modern tram in France now serves as a model that can be exported to many cities worldwide.

The first tip is to be radical and to immediately grasp what other players may have been gradually integrating over time. Design includes different professions, businesses and constitutes a philosophy or mindset, which provides a way of resolving different challenges. Design can be used with a cosmetic or surface approach to beautify products and services, but it is so much more powerful when it is integrated in the early stages of a problem, helping to feed strategies.

The second piece of advice is to focus on global approaches, based on a vision: it is often said that the design allows you to translate strategies into a visible reality. Good design, therefore, must be based on meaningful objectives and clear and powerful strategy.

Finally, the purpose of these design efforts is paramount. These radical changes to the cityscape and the lives of city dwellers need to be undertaken with great understanding of the public spaces and developed in concert with stakeholders, in a process now widely known as “co-design. All people, not just designers, need to be active in the process and not just recipients.

The theme of World Design Capital® Taipei 2016 is Adaptive City – Design in Motion. Adaptive City means that Taipei has the ability to continue to pursue innovation for the well being of our residents despite limited resources. Citizen involvement that drives urban innovation forward and enhances their quality of life is the cornerstone of Taipei’s strategy to create and administer a continually adapting city.

Through this exhibition, we presented a series of projects, including ‘Idea Taipei’, ‘Meet Taipei: Design’, ‘Design Foundation Learning Project’, ‘Universal Design Co-Creation Project’, and ‘Street Cleaning Equipment Improvement Project’, that have been implemented by the Taipei City Government since 2012 to highlight the ideas and methods of Design Thinking and Social Design in Taipei.

Our advice would be to create an open platform. Since 2012, Taipei has established a cooperation system called “Public Policy by Design” project that involves over 20 city government agencies. Through a cross-agency integration platform, we have invited officials, academics, and industrial representatives of different disciplines to work with design professionals, thoroughly investigating existing issues in the city and integrating design into solutions.

‘Street Cleaning Equipment Improvement Project’ was one of the finer examples. Jointly set into motion by the Taipei City Department of Cultural Affairs, Department of Environmental Protection, street cleaners, and design companies, the project was carried out over a six month period, and included three major areas of design: graphic, industrial, and clothing. Twelve professional designers became involved in collecting the opinions of 4500 street cleaners. The factors taken into consideration to create a completely new cleaning box, pushcart, sweeping tools, and dustpan for Taipei City street cleaners included street dimensions, ergonomics, user habits, preferences, and so on. The resulting designs not only provide the street cleaning equipment with an enhanced sense of beauty, but also enable the street cleaners to work more efficiently!

About World Design Capital® (WDC)
While there are many awards that recognise individual accomplishments in design, the World Design Capital designation is unique as it aims to focus on the broader essence of design’s impact on urban spaces, economies and citizens. The designation provides a distinctive opportunity for cities to feature their accomplishments in attracting and promoting innovative design, as well as highlight their successes in urban revitalisation strategies. The World Design Capital is an initiative established and managed by the International Council of Societies of Industrial Design. Past cities to hold the title include Torino (Italy) in 2008, Seoul (South Korea) in 2010 and Helsinki (Finland) in 2012. The City of Cape Town (South Africa) is concluding its programme for 2014 under the theme of Live Design. Transform Life., While preparations for Taipei (Taiwan, Chinese Taipei) are currently underway for 2016. Bids for the 2018 designation are currently being accepted through 31 March 2015.