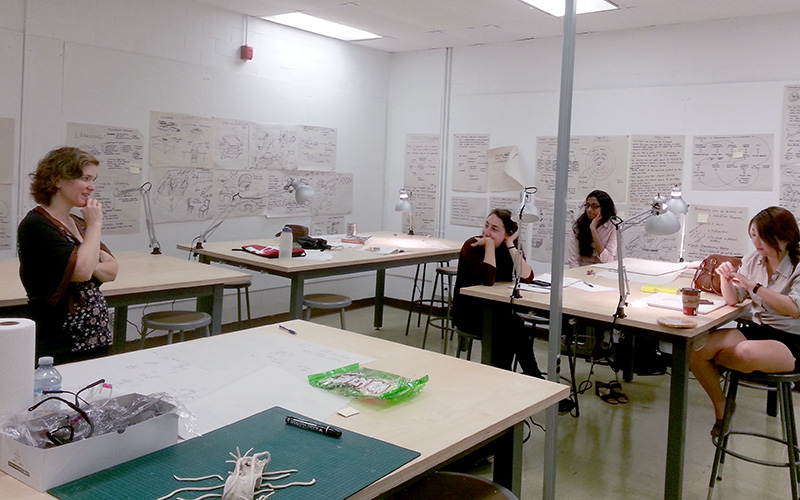 What started as a simple conversation on a long bus ride from Lonavla to Mumbai (India) has lead to a once in a lifetime opportunity for several Indian students.

In partnership with Icsid, associate member Prin. L Welingkar Institute of Management Development and Research lead the 2014 Icsid Interdesign in Mumbai under the theme of ‘Humanising a Metropolis’. The aim of the workshop, as with all Icsid Interdesigns, was to gather roughly 20 designers from different countries and cultures to work with 20 local designers and local experts for an intensive two-week period, exploring design issues of local importance, that could be later applied to other Indian metropolises and international emerging economies. In the case of Mumbai, top students from two of the Institute’s campuses were selected to work with the six subgroups of the workshop.

Professor Thomas Garvey, Director of Industrial Design at Carleton University(Canada) was a participant at Interdesign. During the two-week workshop participants were grouped into teams mandated with a specific challenge.  “Perhaps the best outcome was the experience gained by the host institution and the network of people it created,” Prof. Garvey noted, “I would certainly participate again.” He was especially impressed with the student facilitators in his group.

“The faculty and students I worked with were collegial, supportive and optimistic. We learned a great deal from each other. The students really became essential members of the team.”

This positive group dynamic is what lead WeSchool student Sagar Deshumkh to start a conversation with Prof. Garvey about his life-long dream to visit Ottawa while the group was on a bus ride.

“It’s not everyday you hear someone cite Ottawa (Canada) as a dream destination,” Prof Garvey stated. Sagar went on to explain in acute detail the virtues of an innovative technology company focusing on waste-management based in Canada’s national capital region whose progress he had been following closely. This conversation planted the seed for a new exchange idea as well as the possibility of being able to make one dream a reality.

Five students, Sagar Deshmukh, Parag Patil, Kritesh Jangir, Priya Kothadiya and Agnes Thomas, from both the WeSchool Campus and iFEEL Institute (Institute for Future Education, Entrepreneurship and Leadership) are now finishing a six-week internship at the Carleton University campus in Ottawa, where the University is hosting them for a joint design/business project with corporate sponsorship. They will be working along with Carleton industrial design students in the design studio under the mentorship of faculty from WeSchool and Carleton University as well as several local corporations for which they will undertake projects.

“We’ve taken models from the Interdesign and are continuing to develop them here at Carleton with the intention of bringing them to market, or as close we can get in six weeks,” stated Sagar Deshmukh. “We were working on space optimisation with respect to the university experience and in context of the 3 L’s—living, learning and laughing. It’s a Design Thinking approach for creating new concepts and products. We were busy sketching, observing the experience, creating a design philosophy, and then rendering it using a 3D printer for final prototypes.”

In addition to project work—which includes creating business cases, designing products and conducting market research—the students have also taken advantage of the summer, spending weekends in local and provincial parks as well as in Montreal to visit the Icsid Secretariat offices.

“Based on the feed back from the participants, two members collaborating in this manner is an example of the unique value proposition Icsid provides to its members. This is not the first member collaboration we have seen as a result of Icsid’s international portfolio of projects and we are eager to celebrate this as one of the many outcomes of this year’s Interdesign,” said Dilki de Silva, Icsid Secretary General who welcomed the group to Montreal. “We are also encouraged to see the number of different professions collaborating in Interdesign, and this partnership is allowing students to experience the power of industrial design in two regions of the world.”