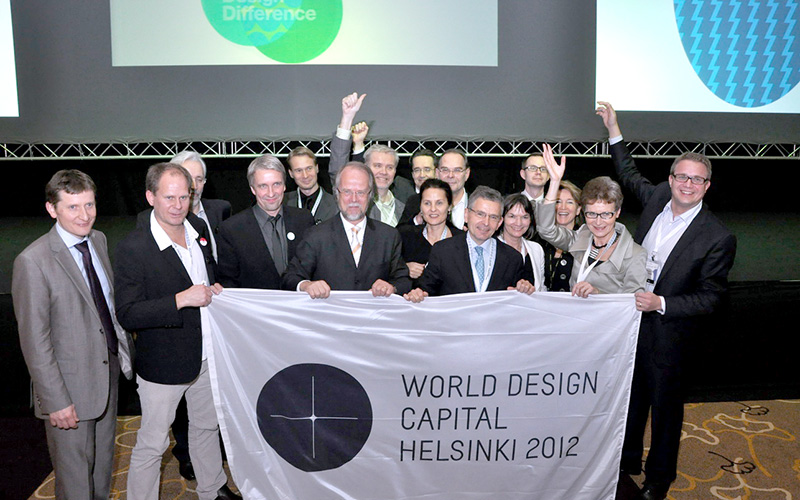 Singapore – The International Council of Societies of Industrial Design (Icsid) announced today, that the appointment of World Design Capital™ (WDC) 2012 has been conferred to the City of Helsinki (Finland). Announced during the closing ceremony of the Icsid World Design Congress in Singapore, Helsinki will move on to be the third city to hold the biennial designation in 2012.

Appointed to cities based on their accomplishments and commitment to design as an effective tool for social, cultural and economic development, the WDC designation is an ambitious project initiated and managed by Icsid to promote the impact of design on quality of life. Since its inception in 2004, the project has developed into a tangible venture and is being recognised internationally for its ability to showcase the merits of design-led initiatives within various municipalities.

Icsid President Prof. Carlos Hinrichsen stated “The WDC designation impresses upon cities, the importance of design as a primary developmental tool. As the world seeks to understand the changing fabric of urban environments, the initiative is uniquely positioned to reflect on the many equations that collectively impact the quality of urban life. From urban regeneration and planning policies, to product development and technology, these and other developmental initiatives have proven that design can be used for the betterment of the human condition.”

For the City of Helsinki, design has for decades been a pivotal enabler to building an open city. The concept of ‘Embedded Design’ has tied design to innovation and has enabled desirable solutions that have addressed the needs of its inhabitants. Helsinki Design is also part of world design – it is created together with the international design community and the people of the world. Helsinki Design includes well-known global brands, such as Nokia, Kone and Marimekko, popular events, like the annual Helsinki Design Week, outstanding education and research institutions, such as the University of Art and Design Helsinki, and exemplary architects and designers such as Eliel Saarinen and Alvar Aalto.

Mr. Jussi Pajunen, Mayor of the City of Helsinki stated, “The decision to designate Helsinki as WDC 2012 brings great responsibility and we accept this title with an open mind and with great enthusiasm. It is an important accomplishment for the metropolitan region, as well as for Finland and will be celebrated with the consortium of municipalities and partners that supported our bid.”

“The WDC designation allows cities to demonstrate that design can be a catalyst for change. Helsinki is ready to be one of those cities and is eager to become a global role model in 2012.”

Leading up to this moment, Helsinki shared a finalist spot for the WDC title with the City of Eindhoven (The Netherlands). “It was an honour for us to have shared the platform with such a reputable city of design,” stated Pajunen. “We are naturally very open to collaborate with all design-led cities.” A bond has been established between Helsinki and Eindhoven, as the two WDC 2012 finalists. This will lead to innovative partnerships between these prominent European design communities.

Helsinki is a vibrant community – a great place to work, live and explore. A modern landscape where talented individuals encompass every sphere of international and Finnish society, it is a hotbed for innovation and a positive environment for creative industries. The City of Helsinki will follow in the footsteps of Torino (Italy) and Seoul (South Korea) to develop an inviting programme for 2012.

About the World Design Capital™ (WDC)

While there are many awards that recognise individual accomplishments in design, the World Design Capital designation is unique as it aims to focus on the broader essence of design’s impact on urban spaces, economies and citizens. The designation provides a distinctive opportunity for cities to feature their accomplishments in attracting and promoting innovative design, as well as highlight their successes in urban revitalisation strategies.
www.worlddesigncapital.com

About the International Council of Societies of Industrial Design (Icsid)

The International Council of Societies of Industrial Design (Icsid) is an international non-governmental organisation for professional industrial design. Founded in 1957, Icsid currently counts over 150 members in more than 50 countries, representing an estimated 150,000 designers worldwide. Icsid members are professional associations, promotional societies, educational institutions, government bodies, corporations and institutions — all of which contribute to the development of the profession of industrial design.

Icsid supports and highlights design as a valuable tool to serve key issues discussed in international forums. This requires collaboration with individuals, governments, NGO’s, companies and organisations, in order to guarantee and strengthen the presence of design at all level. Icsid holds consultative status with UNESCO, UNIDO, ISO and WIPO.
www.icsid.org

Background on the selection panel

As the first city to hold the World Design Capital title, Torino was appointed as the pilot city for the project in September 2005. In close partnership with Icsid, the City of Torino has contributed greatly to the development of the criteria and serves as a benchmark for future municipalities interested in bidding for the WDC title.
www.torinoworlddesigncapital.it/portale/en

In October 2007, the first official bid was launched and the city of Seoul, South Korea was selected as the WDC for 2010. Plans are currently being developed to implement a stimulating programme that will unveil Seoul’s unique culture of design.
wdc2010.seoul.go.kr