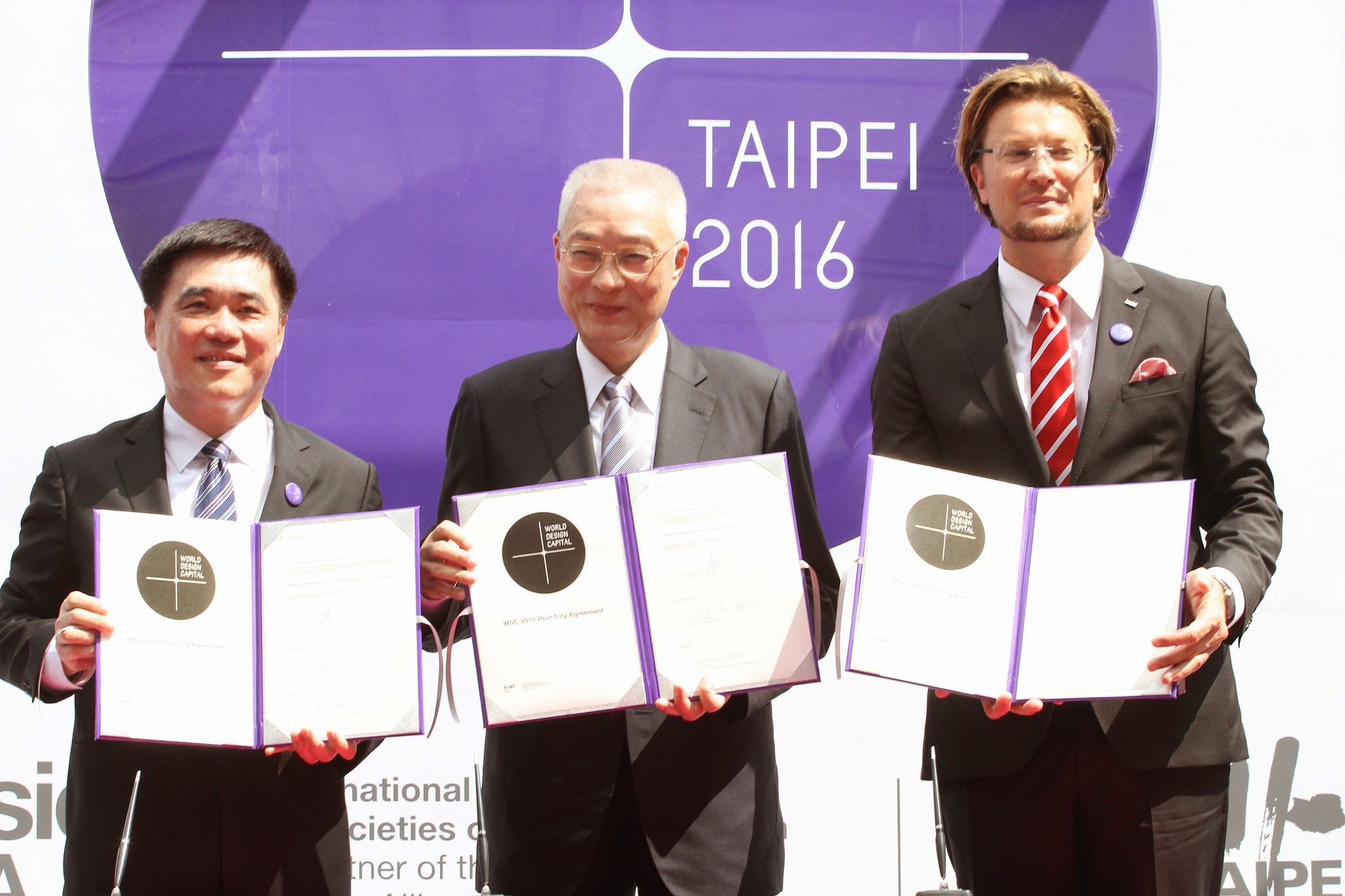 Taipei (Taiwan, Chinese Taipei) – The designation bestowed upon the City of Taipei as World Design Capital® (WDC) 2016 is now official following the signing of the Host City Agreement with Icsid at the Taipei Guest House earlier today. Taipei City Government and the Department of Cultural Affairs are the official signatories, while various projects for the 2016 programme will be implemented by the Taiwan Design Center.

In his speech, Icsid President Dr. Brandon Gien stated “In its bid for the WDC designation, Taipei demonstrated a willingness to transform itself through design processes for the betterment of its citizens, which reinforces its status as an adaptive city. As the fifth city to be awarded this designation, there are high expectations for Taipei to reach new milestones for international cooperation and improve global perceptions of the city as an innovation leader. We have seen first hand how the WDC initiative has helped cities actively engage their communities and manifest positive attitudes towards improving services and the adoption of design strategies within public administration. We are confident that Taipei will draw attention to its own best practices.”

Although the signing ceremony primarily marks the official acceptance of the designation, the event also creates an opportunity to build excitement around the proposed theme and imminent programme that will take place from January to December 2016. Under the theme “Adaptive City”, Taipei will be focusing on a “design in motion” campaign that will both leverage the power of design and inspire citizens to redesign and rejuvenate every aspect of their daily life.

During the ceremony, the official signature colour of WDC Taipei 2016 was also unveiled. As explained the selection of purple – the blending of red, yellow, and blue which symbolises vitality, cultural creativity, and smart technology, respectively. Purple symbolises Taipei as a design capital that has emerged from the cross-fertilisation and interweaving of the advanced science and technology and the human and cultural development that characterise this city. It thus expresses the dynamism of Taipei’s diverse development and continual upgrading.

Guided by the Adaptive City concept, the WDC Taipei 2016 Project will strive to apply innovative methods of urban governance, inviting enthusiastic design practitioners to get involved in public policy affairs in order to address the four key development issues that Taipei currently faces: Quality and Health, Ecological Sustainability, Urban Regeneration, and Smart Living. Taipei’s Adaptive City development model will be a classic example of the trend toward social design, co-design and open design.

While there are many awards that recognise individual accomplishments in design, the World Design Capital designation is unique as it aims to focus on the broader essence of design’s impact on urban spaces, economies and citizens. The designation provides a distinctive opportunity for cities to feature their accomplishments in attracting and promoting innovative design, as well as highlight their successes in urban revitalisation strategies. The World Design Capital is an initiative established and managed by the International Council of Societies of Industrial Design. Past cities to hold the title include Torino (Italy) in 2008, Seoul (South Korea) in 2010 and Helsinki (Finland) in 2102 whilst the programme for Cape Town (South Africa) is currently underway for 2014.

Taiwan Design Center (TDC), acting on behalf of the Taipei City Government, spearheaded Taipei’s bid for WDC 2016. Established in 2004, TDC is a national-level institution that operates as an integrated service platform for creativity development to implement cross-field design in order to create new services, value and overall effectiveness. Driven by a mission to raise the skills of designers to international standards and supplement design talent to meet growing demand for design services, TDC seeks to strengthen industrial competitiveness and support local manufacturers in building their brands. Furthermore, TDC promotes aesthetic education and lifestyles that will help people learn to appreciate innovation and design. The current TDC CEO, Tony K.M. Chang, was twice elected as the Executive Board Director of the International Council of Societies of Industrial Design (Icsid), for the 2006-2007 and 2010-2011 terms.
www.tdc.org.tw