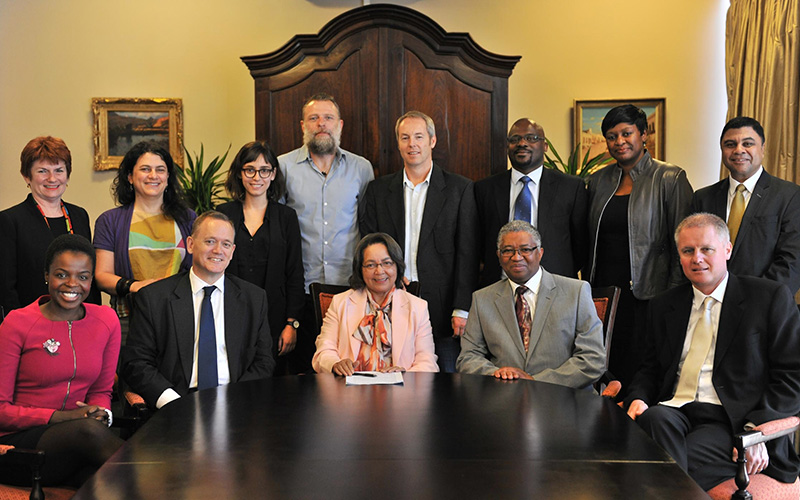 Cape Town Announces Board for the WDC 2014 Implementation Agency

Cape Town (South Africa) – It is with great pleasure that Executive Mayor of Cape Town, Alderman Patricia de Lille announce  the board designate of theWorld Design Capital 2014 Implementation Company. The board was selected after an independent selection process, headed by a selection panel compromised of a number of different representatives of civil society.

“I am confident that this board represents the best people available to help manage the planning, coordination and rollout of the WDC2014 programme,” stated Mayor de Lille. “The board designate has enormous experience and expertise in the design and creative industries, as well as in good corporate governance, which will stand the WDC Implementation Company in good stead and help ensure that Cape Town’s hosting of the World Design Capital 2014 is an outstanding success.”

The board designate members were chosen not as representatives of particular organisations, but rather for their leadership capabilities, skills and experience.

The City of Cape Town has led the creation of the WDC Implementation Company in terms of our obligations according to the WDC 2014 Host City Agreement.

This independent, not-for-profit organisation will be responsible for ensuring that the requirements of the WDC 2014 Host City Agreement are met, and that programme delivery is aligned with Cape Town’s WDC 2014 vision of rebuilding social cohesion, reconnecting the city in structure and in spirit, and repositioning Cape Town for the global knowledge economy.

The Chair and Vice Chair were identified by the selection committee and will be ratified at the first board meeting.

Professor Botman is the Rector and Vice Chancellor of the University of Stellenbosch. He has previously served as the President of the South African Council of Churches and as Chairperson of the Klein-Karoo Arts Festival (KKNK), amongst other leading roles in academia and civil society.

Christopher Whelan is the CEO of Accelerate Cape Town. He holds a Master’s degree in Future Studies and has extensive blue-chip private sector experience in the fields of strategy development and business performance improvement.

The remaining members of the board designate are as follows:

This outstanding collection of individuals, representing the best of the private sector, academia, the design industry and civil society will collectively help to ensure that Cape Town entrenches itself as one of the leading design and creative centres in Africa and beyond.

“I would like to thank them all for making themselves available for this very important work and assure them of the City of Cape Town’s commitment to working with them to deliver the necessary results, ” concluded de Lille.