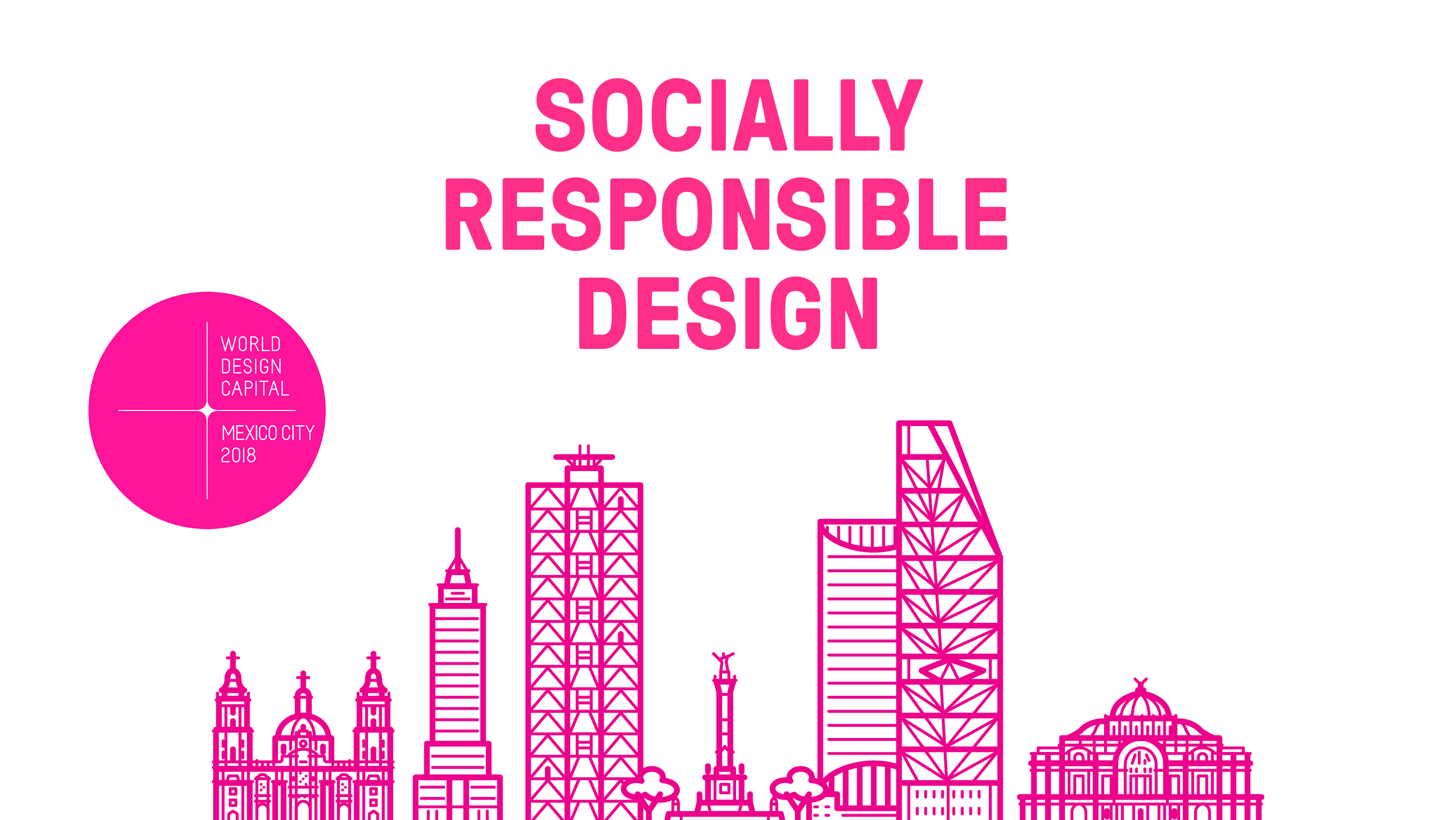 After a selection process in 2015, CDMX was designated as World Design Capital 2018. This initiative, driven by Design Week Mexico along with the City Government, makes CDMX the sixth city, and the first in the American continent to obtain this title given every two years by the World Design Organization (WDO)™.

Under the theme ‘Socially Responsible Design’, the WDC Mexico City 2018’s program will promote design and creativity as engines of social and cultural change in an urban context, as well as to offer proposals to solve the challenges of megacities around the world such as public space, mobility and sustainability. All the creative community will be able to rethink the concept of a megacity, and exhibit the continuous efforts to build a more liveable city.

“World Design Capital Mexico City 2018 has focused on a socially responsible design approach, in order to encourage conversations about design as a configurator of material life and ideas towards the benefit of urban life. The annual agenda that has been prepared joins us to a global movement of cities with a proposal of a Public Program as an active meeting point for professionals and citizens to shape the urban future for our city”, said Emilio Cabrero, general director of Design Week Mexico and World Design Capital Mexico City 2018.

Throughout 2018, World Design Capital Mexico City will present a program consisting of international signature events and a local agenda with academic, cultural and design activities.

The signature events will be implemented in collaboration with World Design Organization, during March, April and October, meanwhile the local program will take place simultaneously throughout the year.

WDC International Design Policy Conference, which will take place on March, 5 & 6 at Palacio de Bellas Artes with the theme ‘The Future of Our Cities: a social approach to the challenges of the first urban century’.

The Conference will emphasize the axes of design, sustainability, education, culture and innovation through an exchange of ideas between a select group of professionals, academics and international guests.

It will also promote the reflection of how we reinvent our cities immersed in continuous state of growth, how we choose to change form a design perspective, and the notion of expansion and infrastructure to rethink urban growth and resilience of the megacities.

The WDC International Design Policy Conference program will unite 13 renown Architects, Designers, Urbanists and Artists that will analyze the challenges, regulatory policies and opportunities that cities face in current times, regarding to public space, mobility, waste management, clean energies for the environment, etc. All this with the purpose of presenting their vision and discussing about new strategies for change that can boost the welfare of our cities and their population.

The personalities participating at the International Design Policy Conference are: Thom Mayne, Pritzker Award 2005 and American Institute of Architects Gold Medal 2013; Daniel Libeskind, director of Libeskind Studio, multi-awarded by the Royal Institute of British Architects, and 1985 Gold Lion by the Venice Biennial; Wolf D Prix, director of Coop Himmelblau, pioneer of the deconstructivist architecture  movement and winner of the European Academy of Sciences and Arts Award; Patrick Schumacher, director of Zaha Hadid Architects, pioneer of the parametricism movement, winner of the Stirling Prize 2010 & 2011, and the Structural Steel Design Awards in 2010, Shohei Shigematsu, director of OMA New York; and Joshua Ramus, founder architect of REX and winner of the AIA National Honour Award 2005 and 2011.

Other participants will be Marion Weiss and Michael Manfredi, directors of Weiss/Manfredi, winners of the International Architecture Award by the Chicago Athanaeum and the European Centre for Architecture Art Design and Urban Studies, and twice winner of the AIA Quality United Architectural Design Award; Gateano Pesce, Italian architect and industrial designer, recognized as the Designer of the Year by A&W Architektur und Wohnens, and Good Design Award by The Chicago Athenaem Museum of Architecture and Design; Stefan Sagmeister, graphic designer, founder of Sagmeister & Walsch Inc., Grammy Award winner in 2005 and 2010, and National Design Award for Communications from the Cooper Hewitt National Design Museum; Daan Roosegaarde, Dutch artist, founder of Roosegaarde Studio with exhibitions at the Tate, Victoria and Albert Museum, and the London Design Museum, winner of the London Design Innovation Medal in 2016; Wade Graham, historian and landscaper, among his published books are: “Dream Cities”, “American Eden” and “Braided Waters”; Charles Montgomery, Canadian urbanist, author of the books “Happy City” and “The Last Heathen”, winner of the Charles Taylor Prize, Hubert Evans Prize and Writers Trust of Canada Prize; Atelier Van Lieshout, Dutch artist winner of the Prix de Rome Award, Stankowski Award, and Kurt Schwitters Award.

The Inter-university program aims to promote academic linkage and generate a collaborative platform between universities, faculties and educational institutions of design and architecture throughout the year.

Each university will develop, within their respective campus, a theoretical-practical program to discuss the most important aspects of city life, from the approach of socially responsible design.

There will be conferences and activities focused on design, innovation, architecture, urbanism, creative economy and government policies, in order to spread among the students, the importance of carrying out actions to improve the life of the inhabitants from their field of training as designers and to foster dialogue and encounter between different universities within the same program.

There will be a Cultural agenda carried out in collaboration with several of the most important museums of Mexico City, both public and private. The WDC Mexico City Cultural Agenda will include exhibitions of historical review and parallel activities regarding to the impact and relevance of design.

The Cultural agenda will start with two exhibitions. The MUCA Roma is currently presenting, until April 22, ‘I Will What I Want: Women, Design and Empowerment’ which explores the complex and contradictory role that design plays in the search of expressing gender equality.

The Chopo University Museum will present, in collaboration with Design Week Mexico / World Design Capital Mexico City 2018, the exhibition ‘Collection of Moments, Design in Mexico, 1999-2015’. This collective exhibition consists on a unique collection – non-existent in any institution before- of contemporary Mexican design. Curated by Cecilia Leon de la Barra, the exhibit gathers more than 100 objects from 40 designers -individual and collective artists- that aim to locate their place in the design culture during the period of 16 years. This exhibition will be open until May 13.

More information about the local design agenda, including dates and venues will be communicated via the WDC Mexico City 2018 website. This calendar of events occurring in Mexico City throughout the year will highlight the joint efforts of the cultural, educational, government and commercial sectors. The program will include events such as Design Week Mexico, celebrating its 10th edition and heading the organization and activities of World Design Capital Mexico City 2018.

For further information about World Design Capital Mexico City 2018, you can visit the site www.wdccdmx2018.com

About World Design Capital Mexico City 2018
In 2015, the Government of Mexico City and Design Week Mexico won the designation as World Design Capital 2018, making Mexico City the sixth city and the first from the Americas to receive the title. Mexico City has a powerful story to share internationally, as a model for other megacities around the world tackling the challenges of urbanization and using design as a tool to enable a safer, more liveable city.

About World Design Capital®
World Design Capital® (WDC), designated every two years by the World Design Organization™ (WDO), recognizes cities for their effective use of design to drive economic, social, cultural, and environmental development. Through a year-long programme of events, the designated city showcases best practices in sustainable design-led urban policy and innovation that improve quality of life. Previous WDCs include Torino (Italy) in 2008, followed by Seoul (South Korea) in 2010, Helsinki (Finland) in 2012, Cape Town (South Africa) in 2014, and Taipei (Taiwan, Chinese Taipei) in 2016. Mexico City (Mexico) holds the title for 2018 and Lille (France) has been awarded the designation for 2020.

About Design Week Mexico
Design Week Mexico is the country’s leading platform for design and architecture. Since 2009, it has curated and managed a varied program of exhibitions, architecture pavilions, installations and conferences that altogether aims to empower the city through creativity and design while addressing the urban challenges of the 21st century.